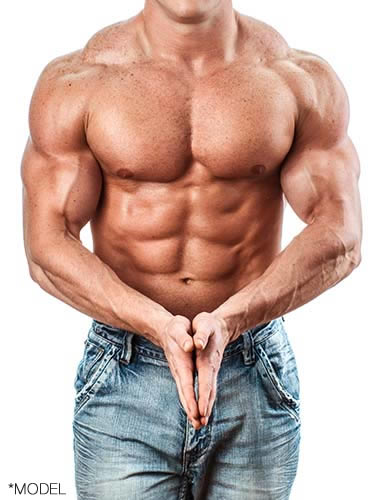 Initially developed for surgical repair of deficiencies, such as congenital pectoral aplasia, pectoral implants can be used to improve the appearance of patients with an undeveloped or disproportionate chest. Over the past decade there has been increased interest is sculpting the ideal male form, as exemplified by provocative ads of men showing off defined abdomens and muscular pectoral regions.   An adequate chest wall is psychologically very important for males, denoting fitness, strength, and power.   For all of these reasons above, pectoral augmentation has become more prevalent amongst men seeking cosmetic surgery as they continue to further define their physique.   Men want to be able to show their chests proudly rather than cowering when confronted with events that reveal the upper torso, such as physical activity (i.e. sports) or simply relaxing at the beach. Using pre-formed silicone pectoral prostheses, the aesthetic surgeon is able not only to correct volume deficits but provide reliable augmentation of the pectoral region, giving men a more defined and muscular appearance.

Since the 70’s, reconstructive surgeons have used solid silicone prostheses to reconstruct chest wall defects as a result of Poland’s Syndrome.

Initially, pectoral augmentation was introduced as a means to treating asymmetries in the pectoral region left due to congenital anomalies (e.g. Poland’s syndrome and pectus excavatum) and in those patients who suffered volume deficits secondary to trauma or post oncologic surgery. Pectoral augmentation, for purely aesthetic reasons, is indicated for the patient who has hypoplasia in the area of the chest muscle and is unable to achieve the desired projection despite vigorous exercise or muscle building. The last group of patients that may benefit from pectoral augmentation are those that have suffered some injury to the pectoral region, leaving them with an asymmetry and defect in the anterior chest.

In any case of pectoral augmentation, realistic expectations should be had by the prospective patient. A patient who has pre-existing asymmetry has to understand that despite augmentation there will likely be a persistent asymmetry (i.e. nipple position or volume). Patients who are severely hypoplastic or have some congenital defect may require more than one procedure with larger custom implants at a second setting to achieve dramatic augmentation as an overly aggressive augmentation in one setting may put the patient at risk of compartment syndrome.

At Chugay Cosmetic Surgery, we prefer to create a square shaped chest and use square shaped implants from AART (Reno, Nevada). Implants are chosen based on evaluation by the treating physician. 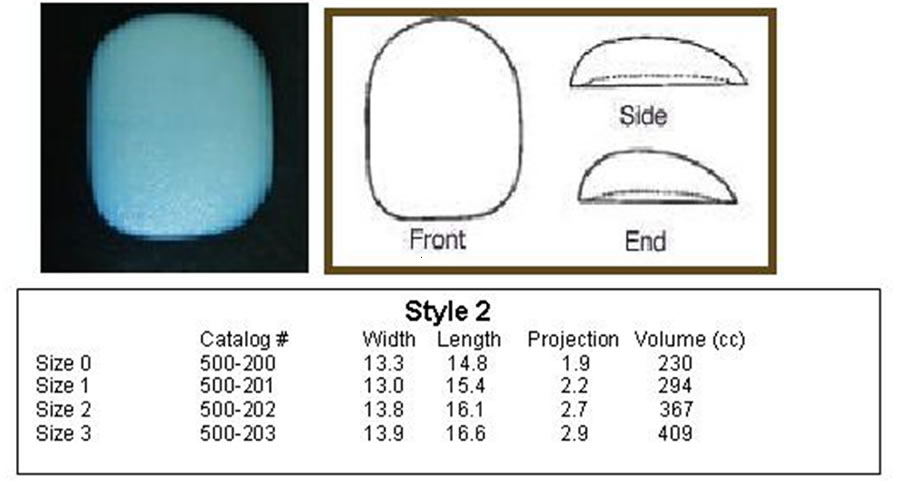 On discharge from the office on the day of surgery, the patients have their chest wrapped in an elastic bandage to diminish the amount of swelling and potential for seroma formation. The patient is seen the following day and the wrap is removed. Next, the patient has their chest placed into a tight spandex vest or has an ACE bandage wrapped around the chest. This compression garment is to be worn at all times for a period of 4 weeks. Patients may remove the compression to shower and to wash as needed. Patients may begin showering the day after surgery, taking care to dry the tape over their insicions with a hair dryer on a low heat setting. The patient is instructed postoperatively to limit the use of the upper extremities and to avoid exertion or any heavy lifting. Patients may begin to use their arms as tolerated immediately after surgery but are restricted from heavy lifting or vigorous chest activity for 4-6 weeks post operatively.

In performing pectoral augmentation, there is a host of complications that can arise;

Pectus excavatum, Latin for “hollowed chest”, is a deformity of the sternum whereby there is a depression in this area as a result of abnormal boney and cartilaginous development. It occurs in an estimated 1 in 150-1000 births, with male predominance (male-to-female ratio of 3:1). Rarely, this depression may cause compression of internal organs such as the heart and lung; however, more than anything the depression results in a cosmetically distressing defect that brings patients to the surgeon for correction.

Classically, the deformity is corrected with extensive thoracic procedures such as the Ravitch and Nuss procedures which introduce bars to restructure the sternum and surrounding bony and cartilaginous structures. Rather than correcting the structural deformity, some surgeons began to report success in using solid implants to camouflage the matter. Implant use is best reserved for less severe cases of pectus excavatum that present at a more advanced age and are able to better participate in decision making with the surgeon.

Poland syndrome is a rare deformity of the chest whereby there is an undervelopment or absence of the pectoralis major on one side of the body. It is usually associated with webbing of the fingers (syndactyly) and may also be accompanied by nipple or breast deformity. In severe cases, there may be partial agenesis of the ribs and sternum; scoliosis; absence of the latissimus dorsi, serratus anterior, and other nearby structures. Poland syndrome most often affects the right side of the body (75% of the time) and occurs more frequently in males than females (3:1 ratio). The incidence is estimated to be one in 7,000 to one in 100,000 live births. While, little disability is noted due to this disorder, even in the most severe of cases, patients often complain of embarrassment due to a self-perceived cosmetic deformity. Thoracic surgery may be a means of repairing the deformity if there is evidence of sternal rotation and very prominent, projecting costal cartilages. Also, latissimus flaps have been used to replace the void in the area of muscle agenesis or underdevelopment, but have been met with unfavorable results due to muscle atrophy and contractures and unaesthetic back scars. Silicone implants can be used to camouflage the deficiency in the chest region in more minor cases of Poland syndrome, helping to bring about greater symmetry between the two sides of the anterior thorax. 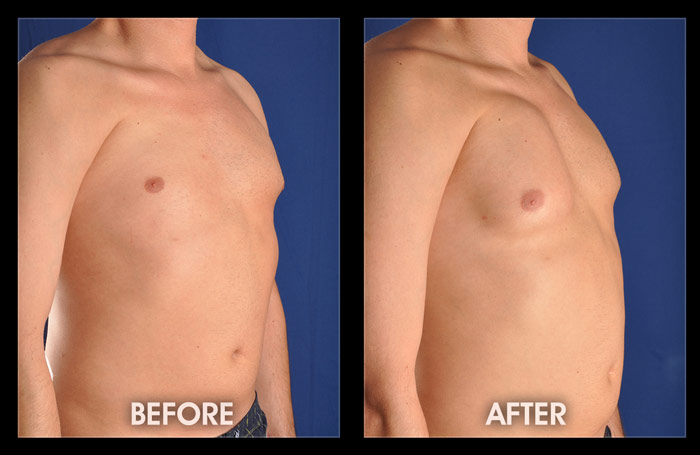 Pectoral augmentation has long stood as an option for reconstruction of defects of the chest. Beginning in the early 90’s, multiple surgeons began to see the benefit of pectoral augmentation to meet the needs of patients who wished to augment a hypoplastic chest despite attempts to increase chest size with conventional and sometimes even aggressive exercise regimens. At this time, pectoral augmentation with silicone elastomer implants is an excellent way to help men achieve greater definition and muscularity, bringing them closer to the muscular ideals of the “manly man” currently widespread in society today.